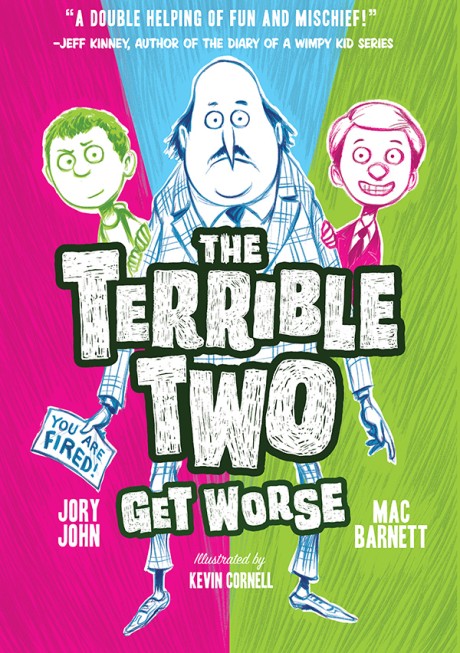 Two pranksters are better than one in the second book in the hilarious New York Times bestselling series by Mac Barnett and Jory John!

Miles Murphy and Niles Sparks are great at being terrible.

Nearly every day the fearsome pranking duo turns Yawnee Valley Science and Letters Academy upside down with their stunts. The Big Chirp. The Cafeteria Calamity. Their pranks bring joy to their classmates and embarrassment to their nemesis: blowhard Principal Barkin.

But one day—school picture day, to be precise—a scheme goes too far, and Principal Barkin ends up fired. His replacement: Principal Barkin Senior, the principal’s no-nonsense father. The new principal runs the school with an iron fist, out to destroy all signs of fun. No group work. No Pajama Day. And definitely no pranking.

In this second book in the sly and silly illustrated series, bestselling authors Mac Barnett and Jory John prove once again that pranks in the hands of the powerless can be tools of justice—and hilarity.

"When pranking perfection meets the seemingly unprankable foe, who gets the last laugh?... John and Barnett's sophomore effort is as much fun as series opener The Terrible Two (2015)... This revenger's comedy, dotted with references to classic plays and philosophical concepts, will be a joy for pranksters and seekers of a good-hearted laugh."
— Kirkus

"Fast-paced and laugh-aloud funny, the book will appeal to a wide range of readers. Frequent, humorous graphics will attract fans of visual storytelling and also make the book more accessible to reluctant readers. Quirky writing and colorful dialogue make the book an excellent read-aloud. VERDICT A welcome addition for fans of the first book, though familiarity with the original isn’t necessary to enjoy this hilarious sequel."
— School Library Journal

"This humorous sequel makes for engaging, fast-paced reading that again highlights the meaning of friendship, and animated, amusing cartoon illustrations enhance and extend the story. Existing fans will enjoy learning more about Miles and Niles and their latest capers, and room is left for another follow-up."
— Booklist

Mac Barnett is a New York Times bestselling author of books for children, including Extra Yarn, which won a 2013 Caldecott Honor, and Battle Bunny. He lives in Berkeley, California.

Jory John is the author of Goodnight Already! and I Will Chomp You! and coauthor of the bestseller All My Friends Are Dead, among other books. He lives in Portland, Oregon.

Kevin Cornell is the illustrator of many children’s books, including Count the Monkeys and Mustache!, both by Mac Barnett. He lives in Philadelphia.