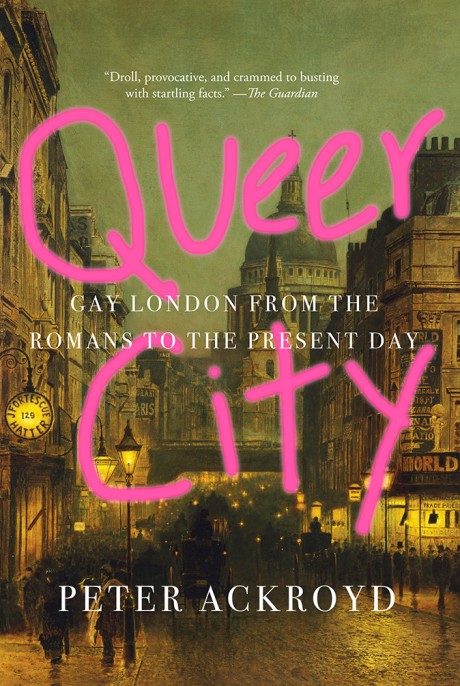 In Queer City, the acclaimed Peter Ackroyd looks at London in a whole new way–through the complete history and experiences of its gay and lesbian population. In Roman Londinium, the city was dotted with lupanaria (“wolf dens” or public pleasure houses), fornices (brothels), and thermiae (hot baths). Then came the Emperor Constantine, with his bishops, monks, and missionaries. And so began an endless loop of alternating permissiveness and censure. Ackroyd takes us right into the hidden history of the city; from the notorious Normans to the frenzy of executions for sodomy in the early nineteenth century. He journeys through the coffee bars of sixties Soho to Gay Liberation, disco music, and the horror of AIDS. Ackroyd reveals the hidden story of London, with its diversity, thrills, and energy, as well as its terrors, dangers, and risks, and in doing so, explains the origins of all English-speaking gay culture.

“Spanning centuries, the book is a fantastically researched project that is obviously close to the author’s heart . . . An exciting look at London’s queer history and a tribute to the ‘various human worlds maintained in [the city’s] diversity despite persecution, condemnation, and affliction.’”
— Kirkus Reviews

“[Ackroyd’s] work is highly anecdotal and near encyclopedic . . . the book is fascinating in its careful exposition of the singularities—and commonalities—of gay life, both male and female. Ultimately it is, as he concludes, a celebration as well as a history.”
— Booklist

"Queer City is a witty history-cum-tribute to gay London, from the Roman "wolf dens" through Oscar Wilde and Gay Pride marches to the present day."
— ShelfAwareness

“Always entertaining . . . much to be recommended.”
— The Spectator

“A nimble, uproarious pocket history of sex in his beloved metropolis.”
— Independent

“Ackroyd has an encyclopedic knowledge of London, and a poet’s instinct for its strange, mesmerizing drives and urges . . . Queer City contains something to alarm or fascinate on every page.”
— The Mail on Sunday

“Droll, provocative and crammed to busting with startling facts.”
— The Guardian

Peter Ackroyd is an award-winning historian, biographer, novelist, poet, and broadcaster. He is the author of the acclaimed nonfiction bestsellers London: The Biography, Thames, and London Under; biographies of figures including Charles Dickens, William Blake, and Alfred Hitchcock; and a multi-volume history of England. He has won the Whitbread Biography Award, the Guardian Fiction Prize, and the Somerset Maugham Award. He holds a CBE for services to literature and lives in London.