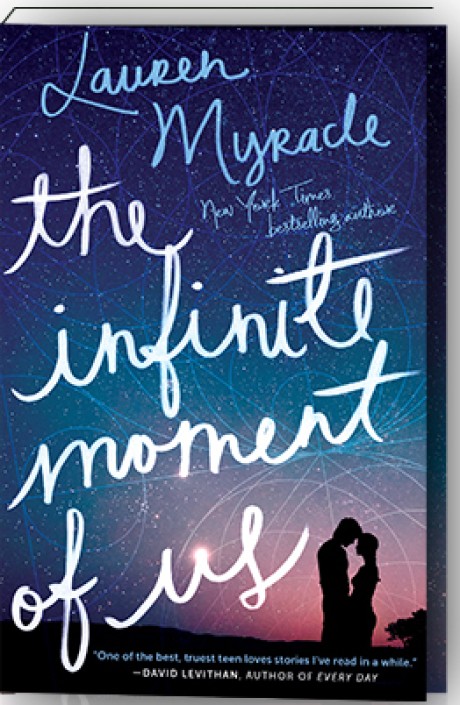 Buy
The Infinite Moment of Us
By Lauren Myracle

For as long as she can remember, Wren Gray's goal has been to please her parents. But as high school graduation nears, so does an uncomfortable realization: Pleasing her parents once overlapped with pleasing herself, but now . . . not so much. Wren needs to honor her own desires, but how can she if she doesn't even know what they are?
Charlie Parker, on the other hand, is painfully aware of his heart's desire. A gentle boy with a troubled past, Charlie has loved Wren since the day he first saw her. But a girl like Wren would never fall for a guy like Charlie—at least not the sort of guy Charlie believes himself to be.
And yet certain things are written in the stars. And in the summer after high school, Wren and Charlie's souls will collide. But souls are complicated, as are the bodies that house them . . .
Sexy, romantic, and oh-so-true to life, this is an unforgettable look at first love from one of young adult fiction's greatest writers.

"In contrast to unhealthy depictions of sex and relationships that teenagers (and adults) are often exposed to in media and entertainment, Myracle offers up a passionate romance built on a bedrock of love, respect, and trust. And it's difficult to see that as a bad thing."
—Publishers Weekly

"Two mature recent high school graduates fall in love and bring out the best in each other in Lauren Myracle's thoughtful exploration of an intimate relationship...the relationship between Wren and Charlie always remains realistic and involving."
—Shelf Awareness

"This charming romance has multidimensional characters, straightforward sexuality, and a pace that lets readers fall in love with the main characters. Myracle expertly captures the intense connection of first love, from the need to spend every moment together to trying to figure out how to communicate with one another."
—School Library Journal

"The single-focus intensity of Wren and Charlie's feelings is spot-on for the age group... chapters move between both their perspectives as they grow into the relationship, offering readers of both sexes a rather compelling example of the how-to's of intimacy."
—The Bulletin of The Center for Children's Books

Lauren Myracle is the author of the New York Times bestselling Internet Girls series (ttyl, ttfn, and l8r, g8r), Shine, Rhymes with Witches, Bliss, and the Flower Power series, among many other books for teens and young people. She lives with her family in Fort Collins, Colorado. Visit her online at laurenmyracle.com.