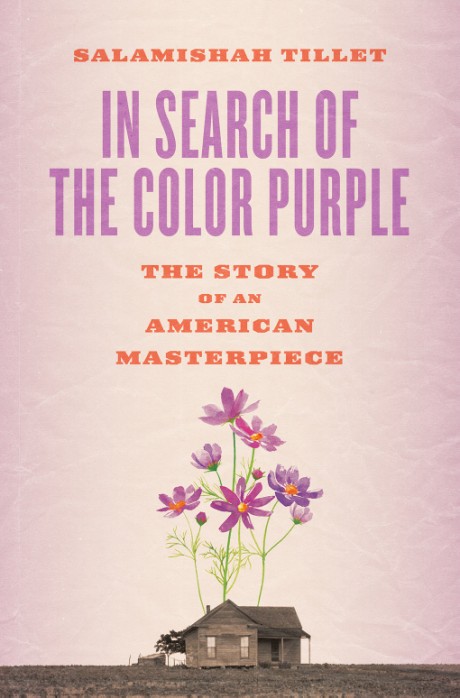 Alice Walker made history in 1982 when she became the ﬁrst black woman to win the Pulitzer Prize and the National Book Award for The Color Purple. Published in the Reagan era amid a severe backlash to civil rights, the Jazz Age novel tells the story of racial and gender inequality through the life of a 14-year-old girl from Georgia who is haunted by domestic and sexual violence.

Prominent academic and activist Salamishah Tillet combines cultural criticism, history, and memoir to explore Walker’s epistolary novel and shows how it has inﬂuenced and been informed by the zeitgeist. The Color Purple received both praise and criticism upon publication, and the conversation it sparked around race and gender still continues today. It has been adapted for an Oscar-nominated ﬁlm and a hit Broadway musical.

Through archival research and interviews with Walker, Oprah Winfrey, and Quincy Jones (among others), Tillet studies Walker’s life and how themes of violence emerged in her earlier work. Reading The Color Purple at age 15 was a groundbreaking experience for Tillet. It continues to resonate with her—as a sexual violence survivor, as a teacher of the novel, and as an accomplished academic.

Provocative and personal, In Search of The Color Purple is a bold work from an important public intellectual, and captures Alice Walker’s seminal role in rethinking sexuality, intersectional feminism, and racial and gender politics.

“Salamishah does what only great writers of literary criticism accomplish—she tells a story about a masterpiece without forgetting the extraordinary woman who crafted it and the legions of women made whole because of her work. A bold and vital tale that rightly treats Alice Walker’s American classic as if it were a living, breathing being demanding our utmost attention and enduring affection.”
— Janet Mock, author of Redefining Realness and Surpassing Certainty

“We need reminders of the stories that have brought us over, the hymns and spirituals and freedom songs our people sang. The Color Purple is such a hymn. Alice Walker is its composer. And Salamishah Tillet, our conductor, lines this hymn for us, beautifully, so that we might all show up, text in hand, and sing its chorus, in tribute to the genius, care, and love of Alice Walker.”
— Brittney Cooper, author of Eloquent Rage: A Black Feminist Discovers Her Superpower

“This book is a stunning act of devotion, a literary and personal excavation of one of the great novels of American literature, The Color Purple. Salamishah Tillet deepens and refreshes our understanding of the novel, movie, and Broadway play, reminds us of the fraught history of the novel’s publication, shows us how it has moved and transformed generations, and reveals how the controversial issues of sex, race, and gender are still as relevant and controversial today as they were then. Salamishah has allowed this extraordinary work of fiction to guide and heal her life, and her book does the same for us.”
— Eve Ensler, author of The Vagina Monologues and The Apology

“The Color Purple is my all-time favorite film, hands down. The book is also one of my favorites, but watching the movie has particularly, over time, become a healing balm—almost a spiritual practice. Salamishah Tillet’s book is a beautiful tribute to The Color Purple, and a gift to those of us who are deeply connected to it. For others less tied to the stories of Celie, Shug, and Sofia, it is a history lesson and cautionary tale of what happens when a Black woman attempts to tell her truth publicly; something to be studied and learn from. This will be a necessary companion for all who engage with this story for years to come.”
— Tarana Burke, Founder of the Me Too movement

“One of my most cherished possessions is a copy of The Color Purple, signed by Alice Walker and dated October 22, 1991. In case of fire, I keep it near my family photos to make sure it is not left behind. In Search of The Color Purple delivers extraordinary insight into both the love and the struggle that made Ms. Walker’s exquisitely crafted novel a masterpiece. After reading Salamishah Tillet’s poignant book, neither readers nor writers will forget that it takes courage and audacity to write a novel that tells the reality of women’s lives.”
— Anita Hill

“An enriching study for the novel’s many devoted readers.”
— Kirkus

Salamishah Tillet is a scholar, cultural critic, and activist. A professor at Rutgers University–Newark and previously a professor of English and Africana Studies at the University of Pennsylvania, she is a contributing critic-at-large for the New York Times. With her sister, she cofounded A Long Walk Home, a Chicago-based national nonproﬁt that uses art to empower young people to end violence against girls and women. She lives in New Jersey.