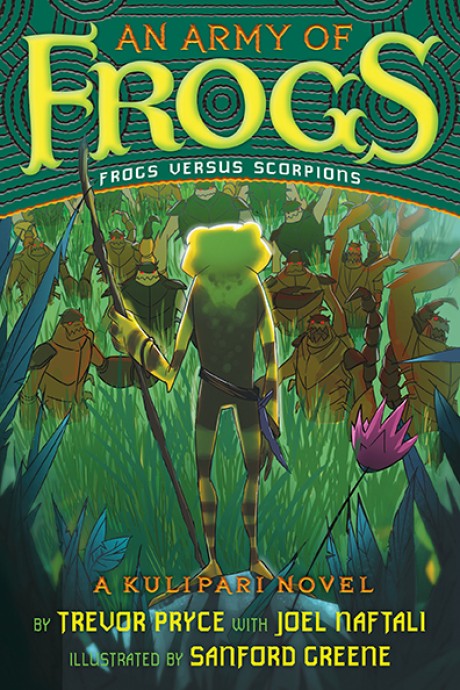 Watch the Netflix original series based on the books starting September 4, 2016!


It’s frogs versus scorpions in this new series by professional football player Trevor Pryce. For years, the frogs of the Amphibilands have lived in safety—protected by an elite group of poisonous frogs named the Kulipari and by the dreamcasting spell of the turtle king that cloaks their lands in mystery. Now the spell is threatened by the Spider Queen, a talented spellcaster, and Lord Marmoo, leader of the scorpions. With the Kulipari off training in secret, the Amphibilands have never been so vulnerable. Enter Darel, a young frog who dreams of joining the Kulipari, despite his utter lack of poison and limited fighting skills. With the help of a motley crew of friends, Darel has the chance to become the warrior of his dreams.
Cool animals, thrilling action, and a bit of natural science—this novel, illustrated in full color by acclaimed comics artist Sanford Greene, is sure to be a major hit with boys.

Praise for An Army of Frogs
"This little frog should find fans among readers of the Warriors and Redwall sagas."
—Kirkus Reviews

"Pryce builds tension as the frogs figure out how to deploy their varied skills and reach the ancient turtle king who long ago placed a protective spell over their land. The violent but not overly graphic action is well matched by Greene’s dynamic and plentiful full-color illustrations."
—Booklist

"In this fast-paced tale, Pryce finds just the right balance between brutality and bravery, friendship and betrayal, and loss and discovery. A must-have, winning adventure that is nearly impossible to put down."
—School Library Journal

"Greene’s color full-page illustrations have the richly saturated look of Marvel comic books, and there’s a superhero feel to the various fighting poses Darel and his pals take."
—The Bulletin of the Center for Children's Books

Trevor Pryce is a 14-year veteran of the NFL who played defensive end for the Denver Broncos, the Baltimore Ravens, and the New York Jets. He helped lead the Broncos to a Super Bowl victory in 1999. He lives in Maryland. Joel Naftali is the author of many books, several written with his wife, Lee. He lives in California. Sanford Greene is an accomplished comics illustrator whose work has been published by DC Comics, Dark Horse, and more. He lives in South Carolina.