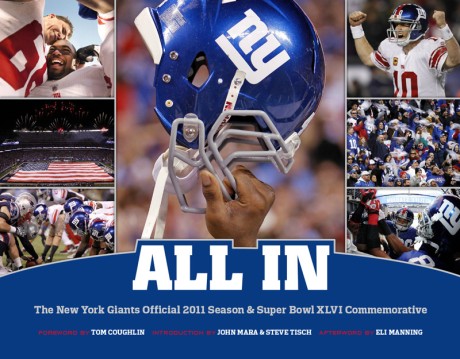 ALL IN is the one and only exclusive, official commemorative book specially commissioned by the New York Giants to celebrate the team’s triumphant 2011 season and epic victory in Super Bowl XLVI.
Filled with insider insights and hundreds of full-color photos, some never before seen, ALL IN shows and tells the story of a team that banded together and bonded as one to defeat the odds—and the vaunted New England Patriots—to claim a fourth Super Bowl title.
Featuring a foreword by head coach Tom Coughlin and an afterword by Super Bowl MVP Eli Manning, this beautifully produced volume not only chronicles the epic season that was but also takes readers behind the scenes—on the team plane coming home from the Super Bowl in Indianapolis, through the Canyon of Heroes and along the parade route to the rally at MetLife Stadium, inside the private ring ceremony at Tiffany & Co., and all the way to the White House. Features on key games, the thrilling playoffs, and star players--Hakeem Nicks, Ahmad Bradshaw, Kevin Boothe, Jason Pierre-Paul, Justin Tuck, Antrel Rolle, Michael Boley, salsa-dancing Victor Cruz, and of course Eli Manning himself—chronicle the season’s glory.
The championship season was emotional, inspirational, and transformational, and this must-have keepsake—like the season itself—will be cherished by generations of Giants fans forever.

Tom Coughlin is Head Coach of the New York Giants. John Mara and Steve Tisch are the owners of the Giants. Eli Manning is the Giants’ star quarterback.