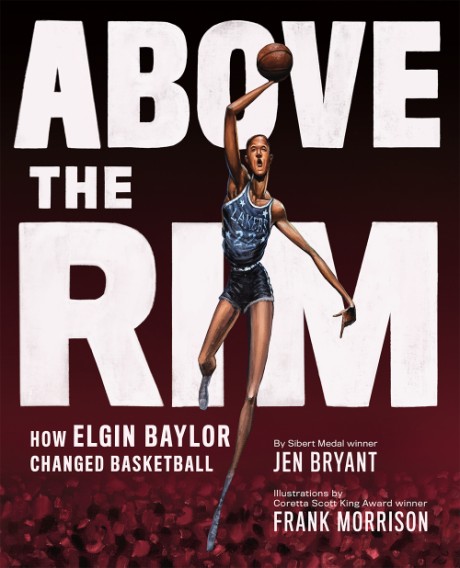 The story of Elgin Baylor, basketball icon and civil rights advocate, from an all-star team

Hall-of-famer Elgin Baylor was one of basketball’s all-time-greatest players—an innovative athlete, team player, and quiet force for change. One of the first professional African-American players, he inspired others on and off the court. But when traveling for away games, many hotels and restaurants turned Elgin away because he was black. One night, Elgin had enough and staged a one-man protest that captured the attention of the press, the public, and the NBA.

Above the Rim is a poetic, exquisitely illustrated telling of the life of an underrecognized athlete and a celebration of standing up for what is right.

"With Baylor’s story, Bryant and Morrison demonstrate that NBA players have a long history of speaking (or, in Baylor’s case, sitting) out against injustices in society. Bryant’s spare, emphatic text relates how Baylor’s Minneapolis Lakers were affected by Jim Crow and how his protest led to a change in NBA policy. Morrison’s vibrant paintings emphasize Baylor’s lithe athleticism, elongated arms and legs extending balletically."
— Kirkus Reviews

"Morrison’s captivating oil on board scenes sear Baylor’s tale into eyes and memories. The artist’s signature long-and-lanky character styling is the perfect match, with the flying tangle of airborne legs a glorious theme for his disciplined composition, and the elegant stature of Baylor himself underscoring his dignified, principled protest."
— Bulletin of the Center for Children's Books

Beyond the Book with Frank Morrison