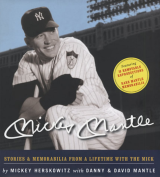 Some say he was the greatest ever—a rare combination of power and speed who made acrobatic catches and never failed to get a hit when his team needed it most. The son of an Oklahoma miner, he was the anchor in center field for a Yankees team that won seven world championships. He was three times the league MVP, he won the Triple Crown in 1956, and in 1961 he dueled teammate Roger Maris in a thrilling race for the single-season home run record. He was so famous that to identify him people didn't even bother to say his last name or even all of his first. He was known, simply, as The Mick.

Mickey Mantle is the first-ever illustrated biography published with the support of the Mantle family. Covering his entire life from his impoverished youth to his glorious career to his poignant sunset years, it features rare photos and never-before-seen memorabilia, with 10 pull-out, removable facsimiles. It also includes intimate stories collected over the years by his sons and his friend, writer Mickey Herskowitz— stories that will be new even to the most avid Mantle enthusiasts. This book is an absolute must for Mantle fans of every stripe, Yankees fans, and baseball fans in general.

Mickey Herskowitz is an award-winning sports columnist for the Houston Chronicle and has written or co-authored more than 40 books, including the bestselling All My Octobers with Mickey Mantle. He has also collaborated on books with Bette Davis, Nolan Ryan, and Muhammad Ali.