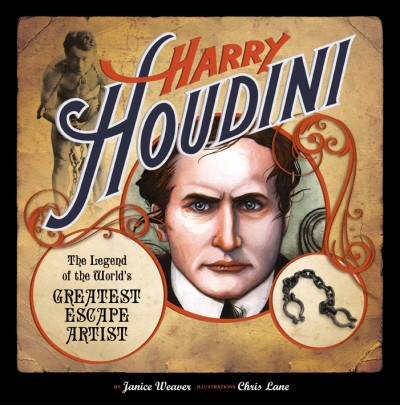 This illustrated biography of Harry Houdini combines original artwork and archival artifacts—including photographs, playbills and posters, letters, and even some of Houdini’s own stage props—to bring the story of the world’s greatest escape artist to life.
Readers will learn all about Houdini’s unique rags-to-riches story, from his birth in a Hungarian ghetto to his death from a ruptured appendix at age fifty-two. The book details his career as an escape artist and explains how he evolved into the “King of Handcuffs” on the vaudeville circuit and became an international star as his escape attempts reached ever more elaborate and dangerous heights. Filled with little-known facts, this is the perfect book for readers interested in magic and the history of Houdini.
The book includes a bibliography and index.

Praise for Harry Houdini
"…a beautifully illustrated biography of this most fascinating man…With entertaining sidebars on metamorphosis tricks and dime bars, Harry Houdini is sure to enchant aspiring magicians, offbeat history buffs and anyone who, in our own straitened times, appreciates a good rag-to-riches tale"
—New York Times

STARRED REVIEW
"Period photographs from newspapers, personal collections, advertising flyers, and other sources alternate with full-page color artwork to create a rich, engaging tableau. While there are several excellent biographies of Houdini available...this one is a solid addition."
—School Library Journal, starred review

"A well-rounded addition to the children’s bookshelf about the multifaceted man."
—Publishers Weekly

Janice Weaver is a noted non-fiction author for young people. Her book Hudson received a starred review from Booklist. She lives in Toronto. Chris Lane, an illustrator whose work has appeared in numerous publications, lives in Oakland, California.