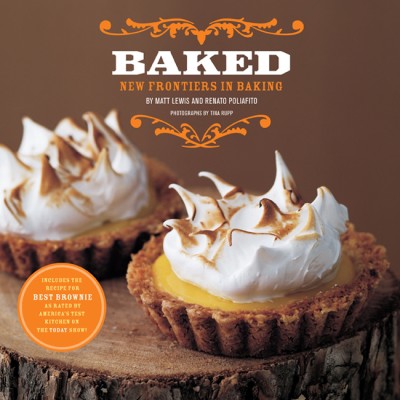 As featured on The Martha Stewart Show and The Today Show and in People Magazine!

Hip. Cool. Fashion-forward. These aren't adjectives you'd ordinarily think of applying to baked goods. Think again. Not every baker wants to re-create Grandma's pound cake or cherry pie. Matt Lewis and Renato Poliafito certainly didn't, when they left their advertising careers behind, pooled their life savings, and opened their dream bakery, Baked, in Brooklyn, New York, a few years back. The visions that danced in their heads were of other, brand-new kinds of confections . . . Things like a Malt Ball Cake with Milk Chocolate Frosting, which captures the flavor of their favorite Whoppers candies (and ups the ante with a malted milk ball garnish). Things like spicy Chipotle Cheddar Biscuits that really wake up your taste buds at breakfast time. Things like a Sweet and Salty Cake created expressly for adults who are as salt-craving ?as they are sweet-toothed.Which is not to say that Lewis and Poliafito sidestep tradition absolutely. Their Chocolate Pie (whose filling uses Ovaltine) pays loving homage to the classic roadside-diner dessert. Their Baked Brownies will wow even the most discriminating brownie connoisseur. And their Chocolate Chip Cookies? Words cannot describe. Whether trendsetting or tried-and-true, every idea in this book is freshly Baked.

After years in the advertising business, Matt Lewis and Renato Poliafito decided to leave their day jobs and open a bakery in Red Hook, Brooklyn. Baked opened in January 2005 to instant rave reviews. The authors have been featured on Oprah, the Food Network, Martha Stewart’s daytime show, and the Today show. The bakery has been reviewed in countless magazines, both local and nationwide. Lewis and Poliafito live in New York City.

Tina Rupp is a New York–based photographer who specializes in photographing food and children. Her work can be found regularly in Food & Wine, Everyday with Rachael Ray, and Parenting magazines.