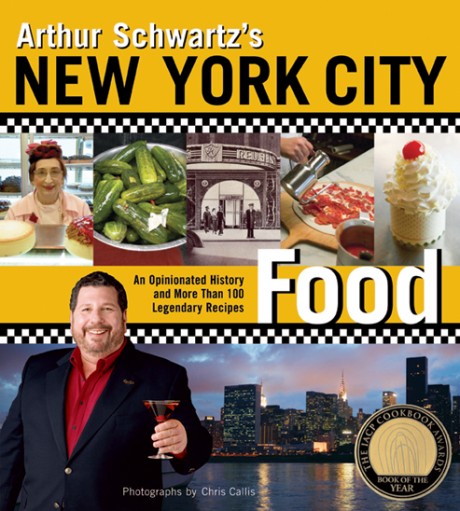 Arthur Schwartz is the Big Apple's official foodie-about-town, a fellow who has fork-and-knived his way through the five boroughs. He knows his knish from his kasha, his bok choy from his bruschetta, his falafel from his frittata. And in Arthur Schwartz's New York City Food, which won the IACP Award for Cookbook of the Year in 2005, he shared his gastronomic expertise, chronicling the city's culinary history from its Dutch colonial start to its current status as the multicultural food capital of the world. The affordable new paperback edition is chock-full of the same fascinating lore, along with 160 recipes for American classics that either originated or were perfected in New York: Manhattan Clam Chowder, Eggs Benedict, Lindy's cheesecake.

Throughout the book, Schwartz's text is transporting, taking readers back to Delmonico's, the Colony, and the Horn & Hardart Automats. Whether revealing how an obscure dish known as Omelet Surprise was transformed into the decidedly chichi dessert Baked Alaska; investigating why some Jewish restaurants came to be known as Roumanian steakhouses; or instructing readers on the way to bake a molten chocolate minicake worthy of Jean-Georges Vongerichten, Arthur Schwartz's New York City Food is the ideal dining companion.

Native New Yorker Arthur Schwartz was the host of radio’s Food Talk for many years, as well as the longtime executive food editor and critic of the New York Daily News. His previous books include Naples at Table: Cooking in Campania and What to Cook When You Think There’s Nothing in the House to Eat. Schwartz grew up in Brooklyn, where he lives today.

Chris Callis has been a professional photographer for more than 30 years. He is the photographer of Maury Rubin’s Book of Tarts and Stewart Tabori and Chang’s Alvin Ailey Dance Moves, among other titles.